Amsterdam, The Amsterdam Music Theatre is aptly described as “a young theatre with a long history”. Its planning began right at the beginning of the 20th century, and in between then and its completion in 1986, it has seen no end of turmoil. Its proposed site was changed to just about every possible bit of open land in Amsterdam (it was even proposed to be a “mobile opera house” at one point!).

Located just next to the Waterlooplein in the historic centre of Amsterdam, The Amsterdam Music Theatre is aptly described as “a young theatre with a long history”. Its planning began right at the beginning of the 20th century, and in between then and its completion in 1986, it has seen no end of turmoil. Its proposed site was changed to just about every possible bit of open land in Amsterdam (it was even proposed to be a “mobile opera house” at one point!). Riots broke out as the first pilings were driven into the ground. Architects were fired, plans amended, other architects died, funding was stopped an then started again.. There seemed to be no end to the stress. But with its completion and grand opening on September 23, 1986, Amsterdam finally had a new home for its renowned ballet and opera companies. With a multiuse building such as this, the technical in-house team has to be of as high a calibre as the creative elements, and Frederik Furnee along with his team are providing the absolute best in audio environments. 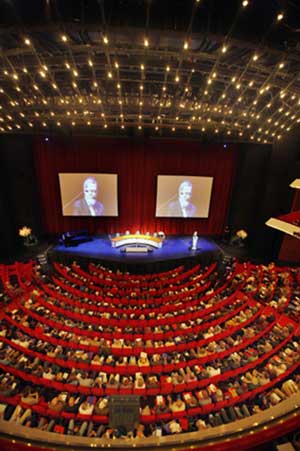 The audio systems available for use in the Muziektheater are second to none. Of course, a world-class reinforcement system in the theatre itself provides incredible coverage, no matter what the seat. And, matching it, in the back rooms, are prep and design rooms that had to match the quality of the front of house. We caught up with Frederik and his team to find out why he found that Merging Technologies’ audio product range was the perfect candidate to provide the backbone to their audio systems.

This one word answer to our question of why the choice to bring Merging Technologies into the theatre speaks volumes about the world that Frederik and his team live in. This is a world where everything has to work every time it is turned on. The 2000 capacity theatre, and internationally acclaimed performances will not stand for technical faults halting the show.
The first product bought by the theatre were a host Pyramix systems, to be used for multitrack recording of the events and editing them to then mix and deliver them as CD and DVD releases for sale.

“ We are usually recording 64tracks for over 120 minutes!”

This type of intensive recording is now something they do without batting an eyelash, as Pyramix has never let them down.

“..the software is so reliable and it never crashes.”

Fast forward a couple of years, and we see the MusiekTheatre confidently capturing all of its shows with ease. But this is in stark contrast to what they go through when getting ready to put the show on. Most large-scale productions for them are not always about orchestral playback alone. A lot of operas, ballets and other stage performances require heavy audio pre-production that is then played back on the night. For this, the whole process slowed down immensely.Changes were never immediate. Rehearsals were note-taking exercises, where changes had to be made offline and then brought back to the stage at another time. The time had come to bring in Ovation.

“It integrates very well with Pyramix and it’s very reliable. We were excited at the prospect of not burning any performance CD’s anymore, having the ability to make immediate corrections and changes of edit’s and audio-files along with the possibility of easily playing multi-track audio files in the theatre, not to mention the huge increase in the quality of sound!”

One of the main features that they wanted to use within Ovation was the integrated editing with Pyramix, including being able to listen to the editing through the same outputs as the Ovation. Having untold amounts of re-editing and shuffling to do during rehearsals, being able to open the cue up in the Pyramix timeline and make précis edits and add more sounds to the multitrack (up to 384 tracks!) cue, then send it back to Ovation without having to render or mixdown, means that directors will never loose there patience.. well one can hope at any rate.

“The edits were done in advance but there were a lot of sound-checks. The possibility of making changes and save them immediately was new for the artistic team and they saved a lot of time because of this. The artistic team was impressed by the quality of the sound of the effects.”

The other feature which has made a huge improvement on their workflow during ShowTime, has been the ability for the operators to store shows which have big, easy to read, easy to access buttons which control standard parts of the show. Using the Hot Keys and Custom Keys Cue Lists, the technical staff was able to create default cue lists which were opened into each show, containing curtain call announcements, mobile phone warnings and the like into simple buttons that anyone in the control room would be able to find. With all of this Pyramix and Ovation equipment installed, the last piece of the puzzle was what to do about the storage of all the media that was being used and created by the theatre. For this they brought in Merging’s own Luxor Media Server, for a dedicated file storage network. The Luxor Media server relies on the fact that all of Merging’s product ranges are optimized for network streaming. So now, they can work on their shows for the entire rehearsal process, playing files directly form the Luxor itself, then, only when they decide that they want to have the files located locally, they do a quick consolidate of the show to the Ovation media drive.

The Het MusiekTheatre in Amsterdam may have had a slow start to its life, but it really seems that with their live production workflow from Merging Technologies, they will be racing into the future.