Merging Technologies regularly supports the Student Recording and Design Competition at AES Conventions and the winner in Rome was Victor Osadchev of Gnesin Academy of Music in Moscow. Already a Pyramix user, he has some interesting information on the challenges faced in making his recording of the Shostakovich Cello Concerto No 2 Es-Dur.

Merging Technologies regularly supports the Student Recording and Design Competition at AES Conventions and the winner in Rome was Victor Osadchev of Gnesin Academy of Music in Moscow. Already a Pyramix user, he has some interesting information on the challenges faced in making his recording of the Shostakovich Cello Concerto No 2 Es-Dur.

A manufacturer offering a product as a prize at any event always runs the risk that the winner has absolutely no interest in the product awarded or it may not even be suited to the work the winner does. It is lucky that the last two times Merging has donated Pyramix software to the AES competition; the recipient was already familiar with Pyramix. The winner at the 134th Convention in Rome was a student from Moscow; Victor Osadchev, who submitted a very ambitious and complex recording for consideration. At the time of the recording in November 2012, Victor was in his third year at Gnesin Academy of Music and was working in the sound department at the Tchaikovsky Concert Hall under the direction of Pavel Lavrenenkov (also a Pyramix user in Russia) in Moscow. The hall is the home of the Moscow Philharmonic Society and its orchestra. This 1500 seat hall was opened in 1940 although the internal decor looks much more recent; the audience seating area is arranged like an amphitheatre with a substantial stage area with a 23 metre wide and 18 metre high proscenium. This provides a very reverberant space with some inconsistencies for different sections of musicians depending where the orchestra is seated. Additional challenges present in the control room which is rather small, has a compromised frequency response and a very narrow sweet spot.

Technical challenges were further compounded by the choice of music to record. Shostakovich wrote complex scores conveying the deep and dark emotions of a composer living in very difficult times. In 1959, when this Cello Concerto was written, his music was still being shunned by the Soviet authorities following an unofficial ban in 1953. This situation lasted well into the 60’s but many works were recorded under his supervision in the very fine Great Hall of the Moscow Conservatory. The recording engineer on many of these was Igor Veprintsev, now a professor in Gnesin Academy. The challenge was to catch the same dark mood with the same transparency.

The Moscow Philharmonic Orchestra was founded in 1951 and worked closely with the composer during his lifetime. The conductor, Sergey Roldugin is also a cello player so he could easily understand the musical challenges faced by the soloist, in this case Edgar Moreau. This talented combination was going to produce a great performance but how would the recording sound in this environment. A full complement of 26 high quality Neumann, Octava and DPA microphones were fed into the Audient ASP8024 analogue console. The output was fed into Lynx Aurora converters and recorded on Pyramix 6 with the reverb imperfections being treated by a Bricasti M7 with M&K being the monitors of choice. As only a short excerpt was needed for the competition, the Second Movement was chosen as being the more expressive portrayal of contained emotion and with a more varied orchestration. Little time was available for rehearsal and getting the sound balance correct and Victor was working completely by himself. The results were subject to the usual coughs and sneezes which are bound to be prevalent at the onset of winter in Moscow, but the music prevailed and Victor was happy to present the resulting recording to the judges. He was rewarded with his certificate and a copy of Pyramix 8.0 native presented by Merging’s President, Claude Cellier. As Victor says; “I am sure this is not the last recording in my life where I realise my ideas. I am just beginning; I know what I want, and believe me, I’ve got big plans.”


For more about Victor Osadchev and Gnesin Academy of Music in Moscow check out these websites: 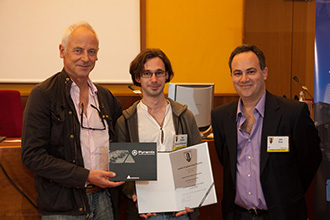 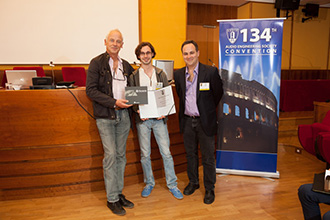 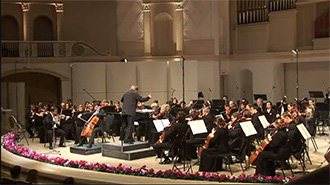 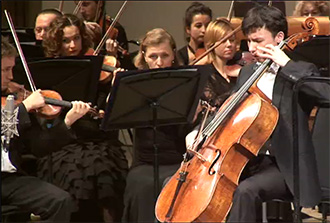