Studio Macac is a newly re-equipped studio in a beautiful building. Horus is an essential component there.

Studio Macac is a part of Czech Radio North (Ceský rozhlas Sever, Czech public radio channel providing regional broadcasting in the city Usti nad Labem). The name Macac originates from 1997, during the penultimate reconstruction of the radio studios. The former technical staff of the radio decided to sponsor the local Zoo, in particular one special animal. (This form of sponsorship is quite common in the Czech Republic. This is a regular contribution of an individual or of a company for the costs associated with an animal of free choice). The team of the Czech Radio North chose a macaque monkey (Macaca radiata). Following this event, the radio recording studio got its name. The sponsorship of the Zoo still continues.

Studio Macac is sought after, not only due to its modern facilities and technologies, but also thanks to its location in the building of the Czech Radio North. Beautiful views of Usti city and of the garden from the studio windows inspire many of the artists coming for recordings. Another good reason to come back is the favourable price. The hourly rate is 250 CZK on weekdays and 350 CZK on weekends and holidays. The great asset of the study is also a Steinway & Sons grand piano, made in 1938 in Hamburg.

Thanks to its extraordinary space, Studio Macac permits recording of various ensembles such as brass bands, choirs and smaller chamber and symphonic orchestras. Among the regular customers, the studio can include art schools, choirs and Benda Chamber Orchestra (local non-professional ensemble focused on the study and interpretation of historical music from the 17th to the 19th centuries, with particular interest of the Czech old masters).

The Studio Macac is open to all genres of music including radio drama, spoken word for business purposes and advertising. However, the greatest volume of contracts is associated with rock and popular music of local bands and artists. Nevertheless, the Studio Macac is well known also beyond the borders of Usti nad Labem. Many bands come from more distant parts of Czech Republic such as Prague, Plzen, Pardubice. Not only that, also the composer and multi-instrumentalist Chakkiri Norio from Mount Fujiyama was impressed by the reputation of the Studio Macac. Together with saxophonist Ivan Myslikovjan, they recorded Vivaldi ‘s Four Seasons here. Among regular foreign customers, German actor, singer and songwriter, Hartmut Krug is also a client.

The mastering facility has regular contracts for finalising mixes with groups VO.ID and Einleitungszeit, who are very popular especially in East Asia.

At the turn of 2014 and 2015, Studio Macac embarked on a major reconstruction of the studio technology and equipment. Pride of place went to the AVID S6 coupled with a Merging Horus Networked Audio Converter. Mr. Karel Zýka, the current Director of Technologies of the Czech Radio, provided great support for the project. During all consultations and discussions concerning the future shape of the Studio Macac, he was always very attentive to the opinions of the studio staff. Studio Manager, Tomas Martin takes up the narrative; "He knowledgeably moderated discussions on this subject and listened attentively to our arguments as to why we wanted these exact facilities. We are very grateful to Mr. Zýka. Without him, the studio would not be as it is today."

There is an interesting story about the Palatial Villa building which houses the Czech Radio North. This villa was built by Carl Georg Wolfrum in the years 1897 - 99. Carl Georg Wolfrum came from a protestant environment in Hof in Germany. He worked his way up from a poor background and became one of the greatest entrepreneurs of Usti. He founded a dye-house, which was subsequently in 1876 transformed into weave-house. In the years 1865-1874, Carl Georg Wolfrum became the head of the District Council. In 1871, after the death of the Count Albert Nostitz, C. Wolfrum became president of the big transport company Usti and Teplice Railways. He also founded an important local newspaper - Aussiger Anzeiger (1857) which was an event of major importance for the development of the city. After his death, his two sons took over the business activities of their father and continued with them. Wolfrum family belonged to the most prominent business families in Usti nad Labem. Center of their activities consisted in the textile industry. However, at the end of the 2nd World War, the Wolfrum family had to abandon their property including the villa. Then, since December 1945, the villa became the seat of the Czechoslovak Radio. In 2005, the building was recognized as a state protected monument. Czech Radio North is still located here.

Usti nad Labem city is situated in the north of the Czech Republic at the confluence of the rivers Elbe and Bílina. It is surrounded by the Bohemian Central Highlands and the Mountains Krušné hory. It has about 100 000 inhabitants. Usti is on the intersection of railway, highway and waterway leading from Prague to Dresden. The city is now known mainly for the chemical industry and transportation, among others. Additionally, the first sound film in Czechoslovak was screened here in 1929. Among the major interesting locations around the city, the nearby village of Stadice stands out. According to legend, this is where the royal family Premyslovci originated, who reigned in Bohemia from the 9th century. Also the nearby town of Litomerice was the place where the famous Czech poet Karel Hynek Macha died and is an architectural jewel of north Bohemia. Nearby Usti is the less pleasant location of Terezin; a concentration camp during the WW2.

"The first and main reason why we chose Merging’s Horus as the main converter for the studio was on the recommendation of Lubos Novacek from Merging’s local representative, Mediatronik. This company was previously involved with the reconstruction of Studio Macac in 1997. We have been extremely satisfied with all the work done by Mediatronik.” Commented Tomas Martin: “Of course, we also carefully checked the technical parameters of the Merging equipment. Finally, based on our researches, we chose this technical option as the best available. We now know that our choice was correct. The modularity and connectivity of Horus has been of great benefit and allows us to easily use external devices that are not in the studio. It does everything we need perfectly and the communication between Horus and the Avid S6 is absolutely flawless." 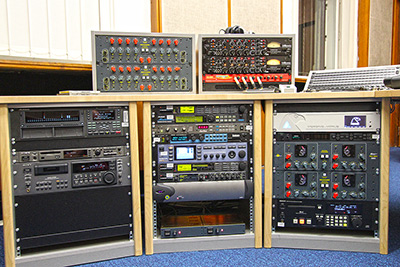 Close up rack with Horus 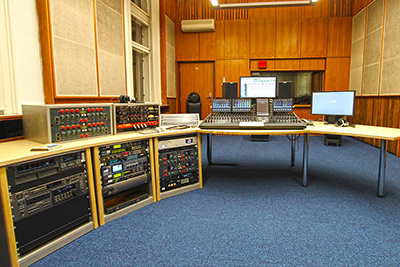 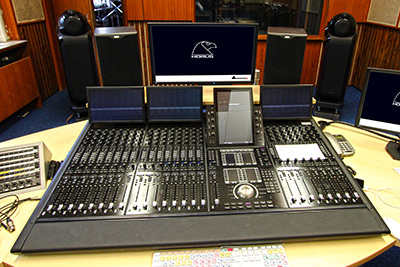 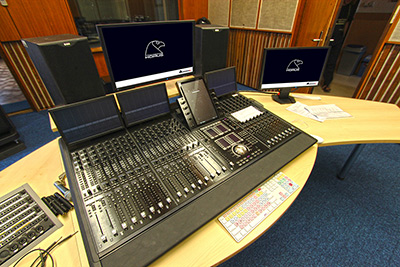 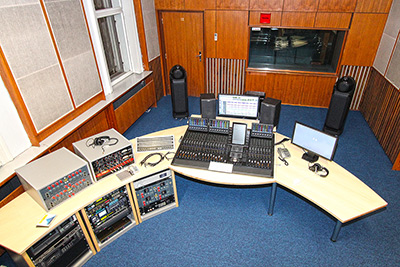 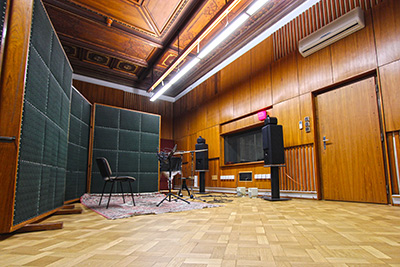 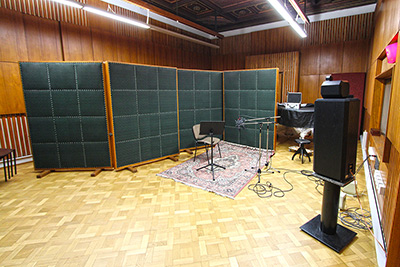 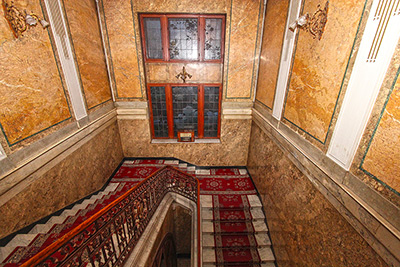 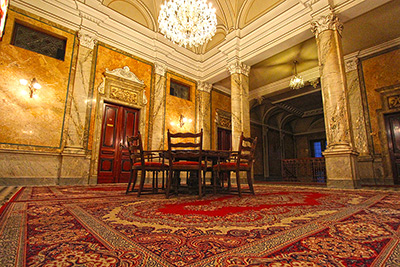