Ten years after the musical “les 10 commandements” Pascal Obispo has returned to the Parisian theatre world at the “Palais des Sports” with his new show: ADAM et EVE la Seconde Chance. At the time of pre-production, he had already shown confidence in Merging Technologies products by initially choosing Pyramix Virtual Studio to do the multi-track recording/mixing and sound design of the audio for the entire show...

Ten years after the musical "les 10 commandements" Pascal Obispo has returned to the Parisian theatre world at the "Palais des Sports" with his new show: ADAM et EVE la Seconde Chance. At the time of pre-production, he had already shown confidence in Merging Technologies products by initially choosing Pyramix Virtual Studio to do the multi-track recording/mixing and sound design of the audio for the entire show. But Pyramix, whilst having a very trusted name in live recording, post production and music mastering, was not the perfect tool for the job of playout at the theatre. The ultimate tool has the ability to playback large scale multi-track audio (as Pyramix is perfectly capable of, but is also then able to playback those multi-tracks instantaneously. This playback needs to be based not only on a spacebar being hit, but from incoming control triggers (MIDI, GPI, TCP/IP etc). It should also be more than capable of transmitting the same types of control protocols as outputs along with the sound. And if needed, it should playback two or more multi-tracks at the same time, through outputs which allow for summing of signal into stems. 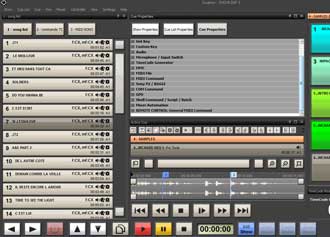 The following is a close look at sound designer and audio engineer, Julien Tota and his experiences with Merging Technologies Ovation Media Server and Sequencer and how he realized the show of his dreams with Merging's new theatre playout device.

What is your role in this production?
I am responsible for the multi-track audio playout, sound effects design and synchronization with action on the stage as well as timing commands with other control devices and the video operators.

What are the different stages of preparation for a muscial production such as this?
Generally, we have a preparation (or pre-production) phase, wherein we design and deliver multi-track audio from the studio and create a rough edit, formatting the music and sound effects for use in the show. The second stage then starts as soon as the rehearsals begin and we then need to work constantly to change our initial edits to fit with the director's vision. 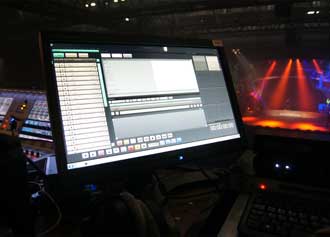 What are the different stages of preparation for a muscial production such as this?
For starters, I am a Protools user and a Mac user, so starting this production with Pyramix made the summer we got going a tough one. As soon as this production is finished, I am signing up for a Pyramix training course!

So why did you go with Ovation then? Throughout rehearsals I am required to edit and re-edit the multi-tracks that we bring from the studio. Before, I was using Protools for the editing I was also using AlesisHD 24 track recorders. So every time I needed to make an edit, I then had to record the multi-tracks back in, in real time! This was an almost sacrilegious waste of time when even after the premiere, Pascal Obispo was asking for more changes. Even the slightest change in the structure of a piece, such as removing or adding a few bars became so tedious in the sense that I had to edit in one machine and transfer to another in real-time. With Ovation, I can instantly transfer a cue containing as many tracks as I need (note: Ovation is capable of containing cues with over 300 audio tracks embedded inside) into the Pyramix timeline on the same system. I can then make the required edit and then publish it right back to Ovation instantaneously! So, with Ovation I can respond quickly and easily to all the demands of the director as well as the front of house mix engineer, Bruno Viricel who rather needs adjustments to track gains and other audio specific parameters. I can, for example, automate levels, pans, mutes, Eq's and more, using the mixer snapshots and recall with the internal Ovation mixer. After that, the programming of MIDI or GPIO (which is all they use on the production at this time) couldn't be easier. It has totally changed the way we work. And, I found out as well that a PC interface is just as intuitive as that other brand with the fruit on the front!