Workflow in multichannel/VR production in binaural with Pyramix

May 2017: RFI is a news radio station broadcasting in French and 13 other languages to all five continents. It is broadcast on terrestrial channels, by satellite, on the web and on connected applications. Every week, this global radio station has 41.3 million listeners and its digital environments record 13.7 million visits per month as well as 15.9 million Facebook and Twitter subscribers.

Since 2015 the projects that require it are broadcast in binaural sound to be listened to on headsets on the France Medias Monde websites and social media (https://en.wikipedia.org/wiki/Binaural_recording)

Pyramix has been used for many years, firstly for vinyl mastering and digitization. RFI has one of the largest archives of African music. In 2012, RFI Labo was created to introduce new technology into the RFI production line in order to make radiophonic writing progress. RFI Labo has a Pyramix Masscore and a Pro Tools connected to a Horus for post-production. Since then, several Pyramix Natives with an interface adapted for directors and editors are used for their multichannel productions. This tool was selected for its flexibility, the adaptability of its interface and its bus mixer structures that can use 22.2 for example, not to forget its full monitoring section.

Multichannel projects are produced in stereo for terrestrial broadcasting and in binaural for the web. An increasing number of programmes include video to be more suitable for broadcasting on social media. Recently, VR 360° was added to the RFI Labo works. For these productions, the entire technical methodology for sound capture, journalistic writing and post-production had to be reviewed and adapted. This work was directed by Xavier Gibert (in charge of the RFI Labo production unit). “In 2012 we created RFI Labo following our 5.1 experiments and we were able to go further for productions, firstly in sound binaural only and starting in 2015 with video. Merging tools - first and foremost Pyramix - were always used in these projects. Currently there is a team of three TCRs (Radio and Video) in Abidjan with a journalist and a production manager to cover the FEMUA festival, which is an important event in Africa and beyond”

The journalists also had to adapt and change the programmes’ narrative sequences; compared to mono or stereo recording, immersive sound recording requires less description of the location. Immersive sound is often enough for the listener to understand the space. As a result, the journalists have to include pauses or transitions in the rhythm of their reports. “We managed to make our senior management understand that when all media was on digital platforms, we needed to differentiate ourselves, but how? Firstly through content, but also through our subconscious relationship with listening comfort. With binaural, the location’s emotion will pass through the space and listeners can project their own emotions” 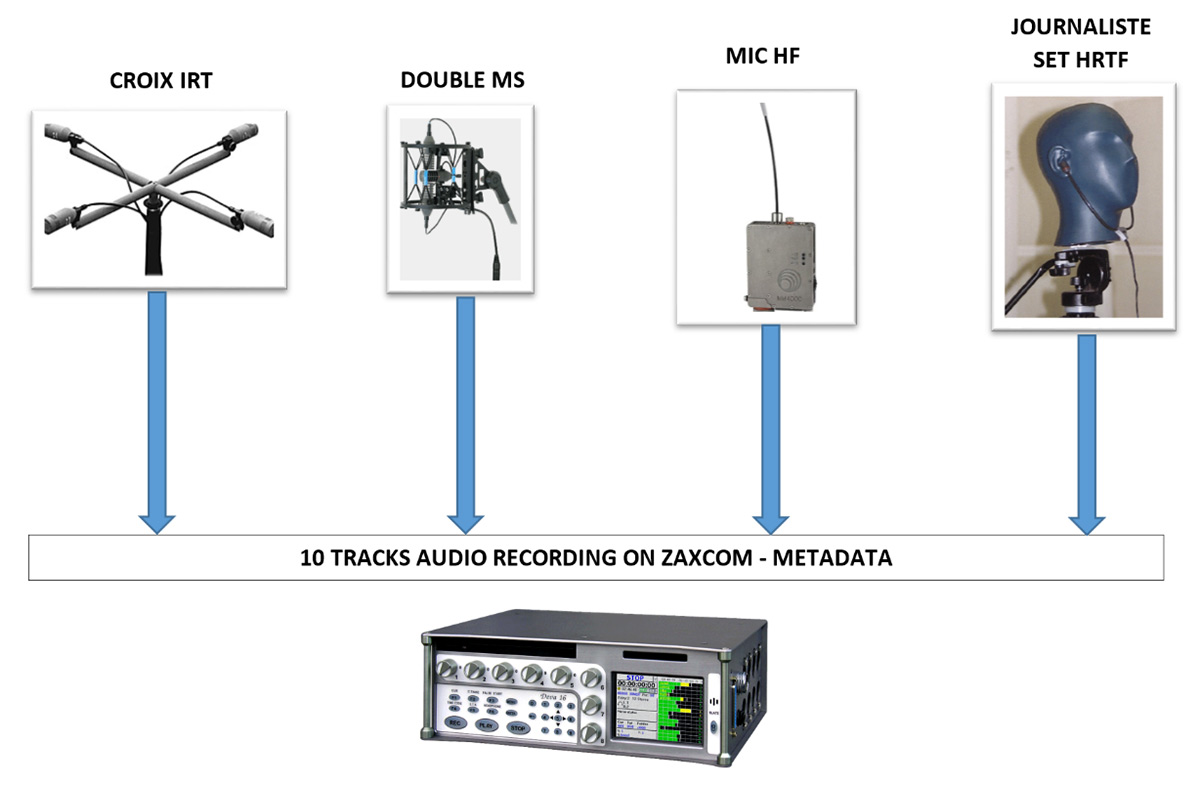 In the studio, metadata is retrieved in Pyramix and the elements are de-rushed and edited. A “bed” is created in 5.1 or 7.1 (basic direct sound mix) and then elevation and narration elements recorded in the studio are added before the final mix. The b<>com binauraliser is on the outputs [Render Spk2Bin] from b<>com *Spatial Audio Toolbox* that allows a multichannel audio 3D with virtual speakers approach. “For the 360 VR we use the same method except that we have 3 binaural output buses, 1 bus with the b<>com plugin for our web platforms, another one with the Noisemaker bus for YouTube emulation and a final bus for the Facebook plugin. The image is on a temporary VCube. We will soon be receiving a new VCube which will make it possible to read 360 files without reduction and to include the metadata during the wrap”.

Xavier Gibert, “For the future we would like to have portable solutions to directly produce content on location without having to use the studio phases.”

RFI Labo productions can be viewed on:

RFI Labo is also consulted for co-productions with other media such as Arte for the 'Touche Française' series :

RFI is a choice Merging Technologies user. Maurice Engler from Merging: “We have always had a constructive relationship with Xavier from RFI because he has the agility to understand new technology and to include it in his production mode. Without him, the production workflow and the implementation of binaural plugins wouldn’t be as smooth” 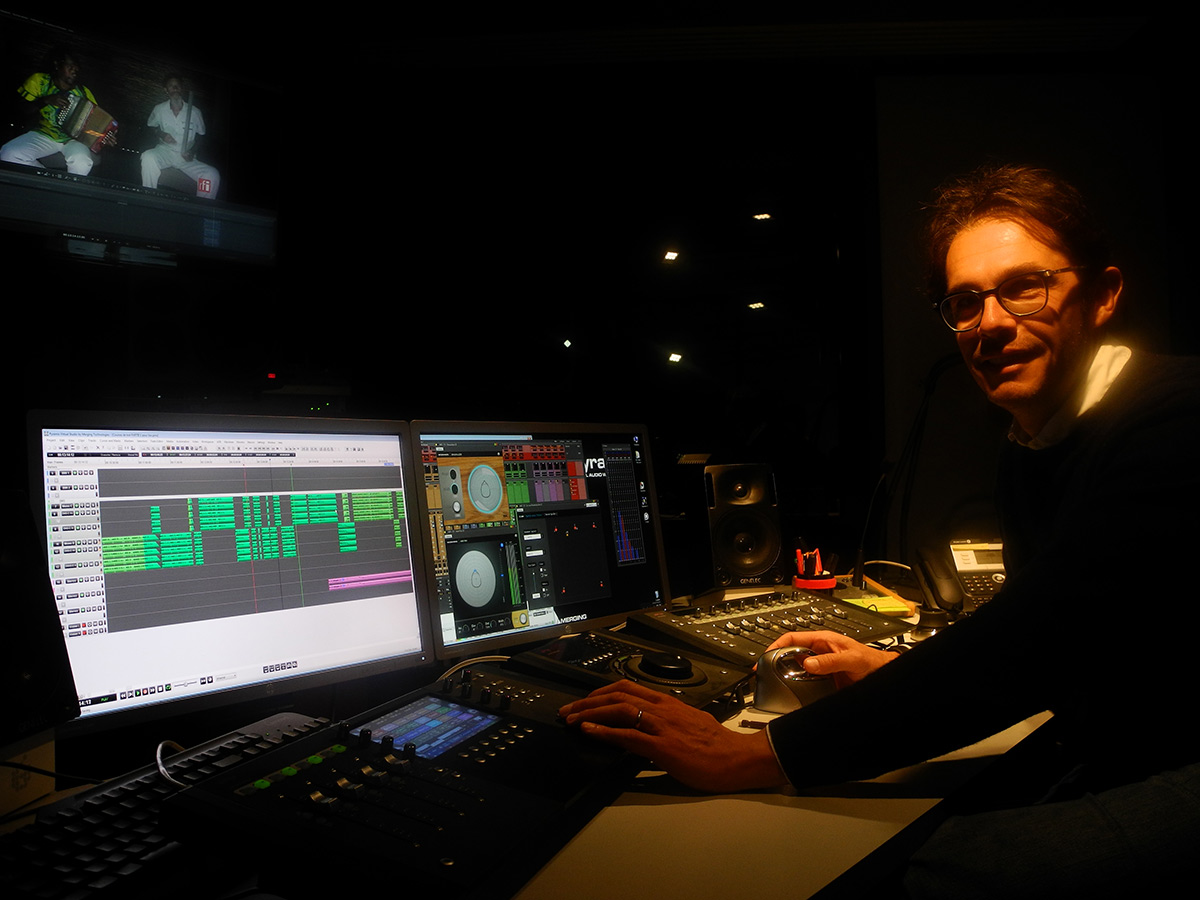 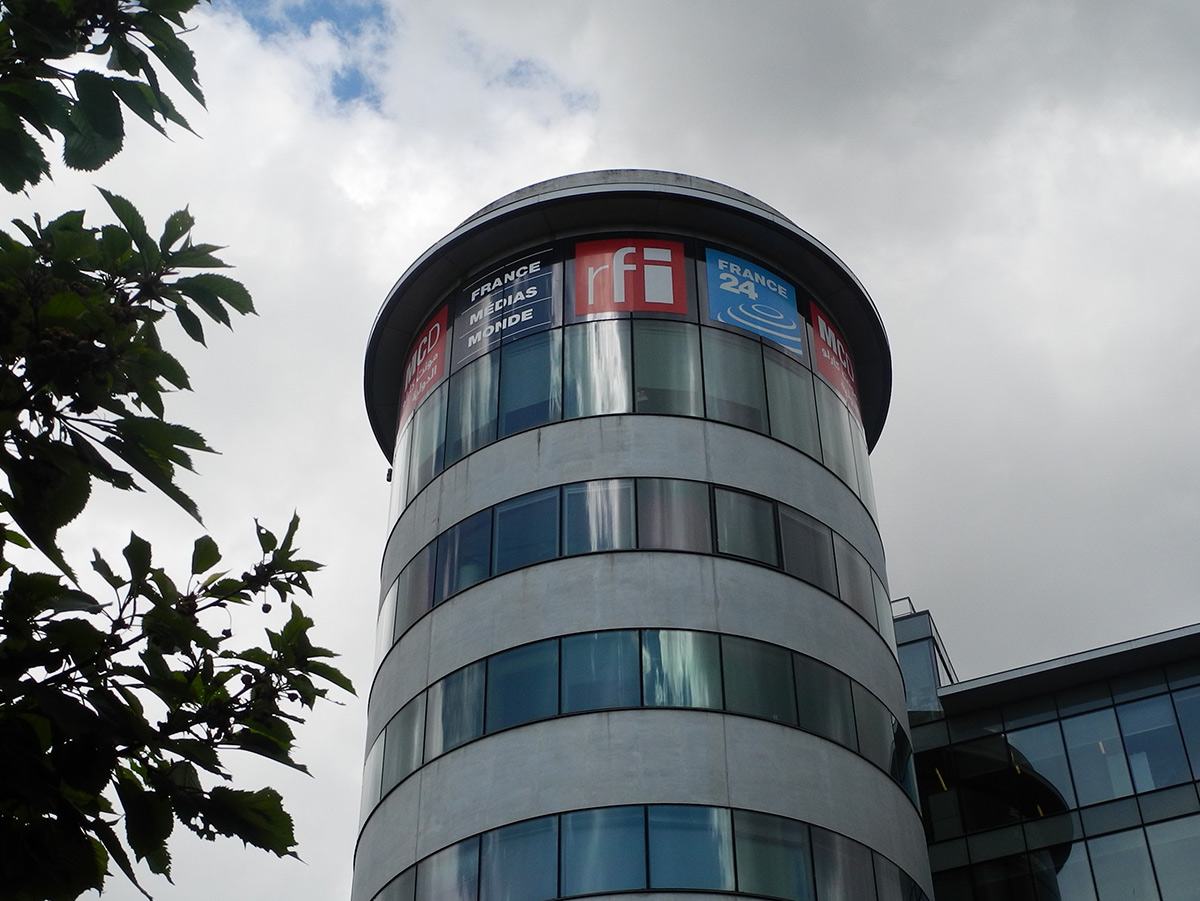 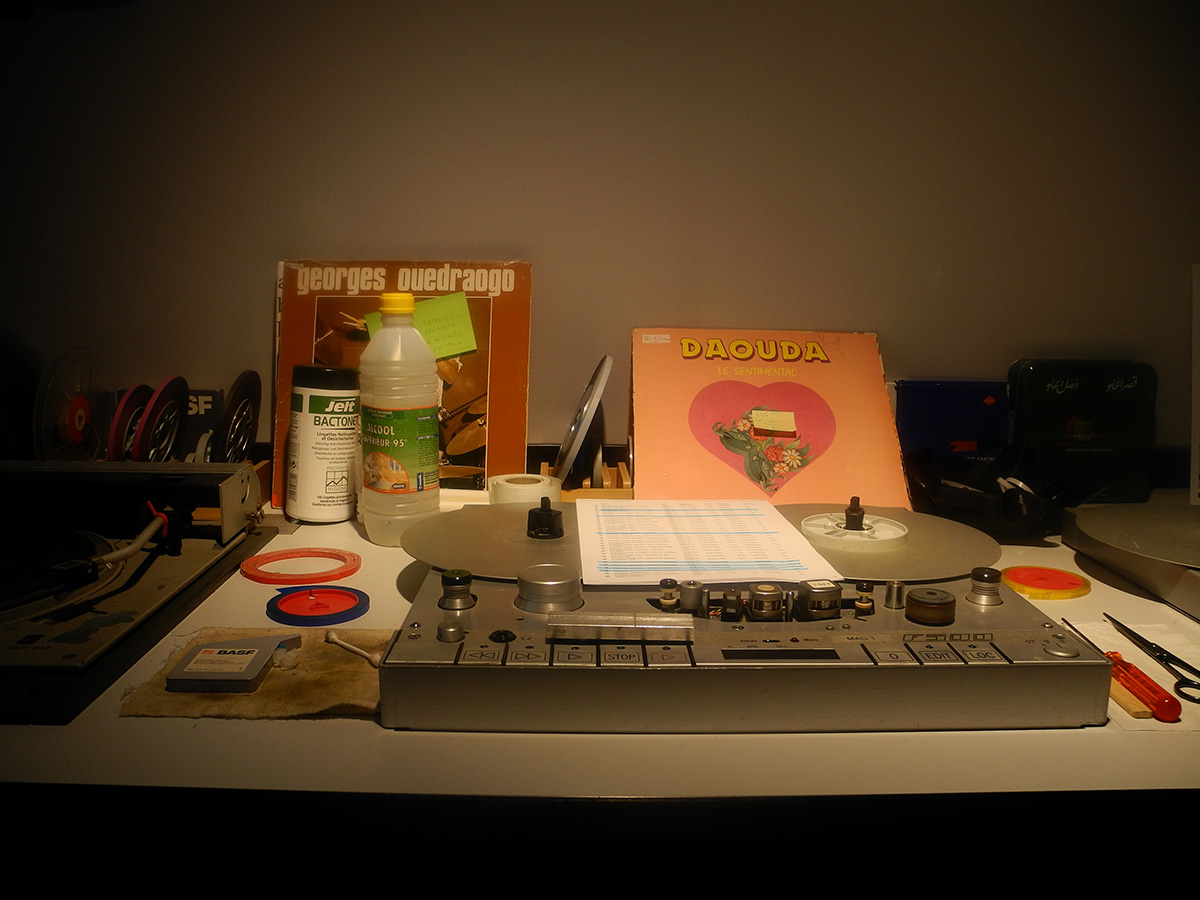 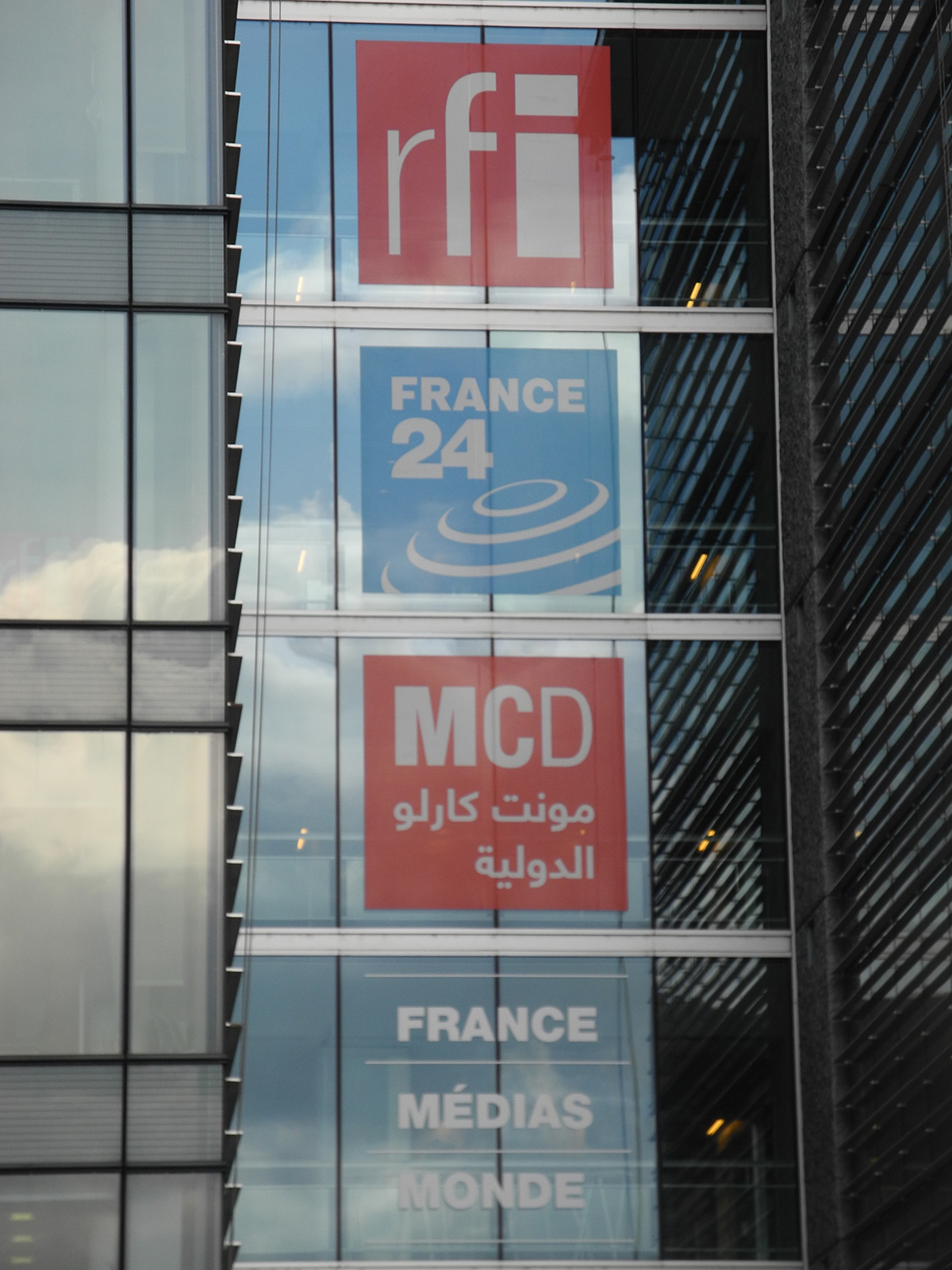 “With its innovations, the Institute of Research and Technology (IRT) b<>com is taking part in the European digital transformation. Its 230 researchers develop tools, products, and services that make everyday life easier. They focus on two fields of research: Hypermedia (ultra-high definition images, 3D sound, smart content, virtual and augmented reality) and more agile ultra-high speed networks (cloud, cybersecurity, ultra-high speed mobile, network resilience, Internet of Things). Of the many fields of application for these technologies, e-health has allowed b<>com to participate in the digital revolution going on in medicine. Founded through a public/private partnership, the IRT gathers the best experts from industry and academia at its campus in Rennes, and at its sites in Paris, Lannion and Brest.www.b-com.com

RFI (Radio France Internationale) is a French news and current affairs public radio station that broadcasts worldwide in French and in 13 other languages*. RFI is broadcast on 156 different FM frequencies, via medium and short wave relays, on 30 different satellite signals throughout the world and also on the internet and dedicated apps. RFI is also broadcast across the globe via more than 1000 partner radios. It draws on the expertise of its Paris-based editorial teams and unique global network of 400 correspondents to provide news bulletins and features offering listeners the means to better understand the world. Some 41,3 million listeners around the world tune into RFI every week (measured in 37 of the 150 countries where broadcasts are heard), and its digital platforms attract an average of 13.7 million visits a month (2016 average) while 15.9 million followers stay connected via Facebook and Twitter (January 2017).rfi.fr

Merging Technologies SA is a Swiss manufacturer with over 25 years of experience in developing groundbreaking, professional Audio and Video products for a wide range of entertainment and media industries. With a dedicated user base in the elite end of the music, film, television, mastering and performances industries, Merging is committed to developing product ranges with unrivalled quality and flexibility, no matter what the application. Merging builds tools for people who want more from their systems, have an inherent need to push boundaries, and believe that quality always comes first.www.merging.com